Old School: Sip From The Horn Of Plenty

Drinking beer is certainly about the actual liquid in the glass, but sometimes the event or experience itself can make the beer so much more.  Here is one such event:

This past week a group of my high school friends, (and a good showing of spouses,) got together to celebrate Martin turning 40.  We had an outing to the Town Hall Lanes for food, beer and bowling which I will probably blog about later.  Afterwards we went over to Hutch and Jess' nearby home to relax and talk in a quieter environment.  We were treated to various home made treats such as salsas, fermented pepper sauce, pickles and more.  Jess has a blog that I now watch closely called Gingergarten, where she experiments with gardening, canning, cooking and more.  She even makes vegetarian things look inviting!   Hutch isn't so shabby at that stuff either.  So while we guests gorged ourselves on this bright bit of preserved summer, the two of them pared apples, rolled dough and threw together a most impressive cooked apple desert.

At one point Hutch magically pulled out an enormous Viking drinking horn from somewhere, surprising even his wife, who didn't know he owned it.  The inlaid lip of the horn glistened in the dim light with coppery fire, reflecting off scenes of Viking ships and the sacking of churches.  From another pocket universe our budding David Blaine apparated a caged and corked bottle of Olvalde Farm Brewery's The Auroch's Horn.  Olvalde is a tiny one-man farmhouse brewery from the small Minnesota town of Rollingstone that specializes in old and often extinct styles of beer.

The Auroch's Horn is described this way on their website:  "The Auroch's Horn is a modern reinterpretation of ancient ale brewed throughout Europe more than two thousand years ago. Ale was a staple of the barbarian diet, with Roman historians documenting a beverage made with barley, wheat, and honey in Britannia, Gaul, and Germania. The ale was consumed from the horn of the auroch (or aurochs), a now extinct wild bull."  They recommend drinking this at cellar temperature )50-55 degrees F.  Luckily Hutch had kept this in his cool cellar and it was perfect! Hutch gently poured this golden and well carbonated beer into the waiting horn, white foam nearly overflowing the copper chased rim.  Then in proper old Norse fashion, we handed the horn around to sample this historic libation.

This is actually one of my favorite Minnesota beers, but it often misses my top lists for some reason.  The strong alcohol content is tempered by a sweet honey and caramel character.  Bittering is low, but enough to keep it from being cloying.  And it is dangerously drinkable!  Taking a hearty swig from this large horn awoke the dormant Norwegian blood in my veins, activating the Atavistic Viking lurking back in my lineage.  Controlling the desire to bellow a berserker scream, draw sword, and lay waste to the local shipping lanes and churches, I continued to enjoy this hearty beer.  If you haven't checked out this brewery, you owe it to yourself to try out some of their unique offerings.  And drinking them from a horn or perhaps a bejeweled chalice will probably make you enjoy them more! 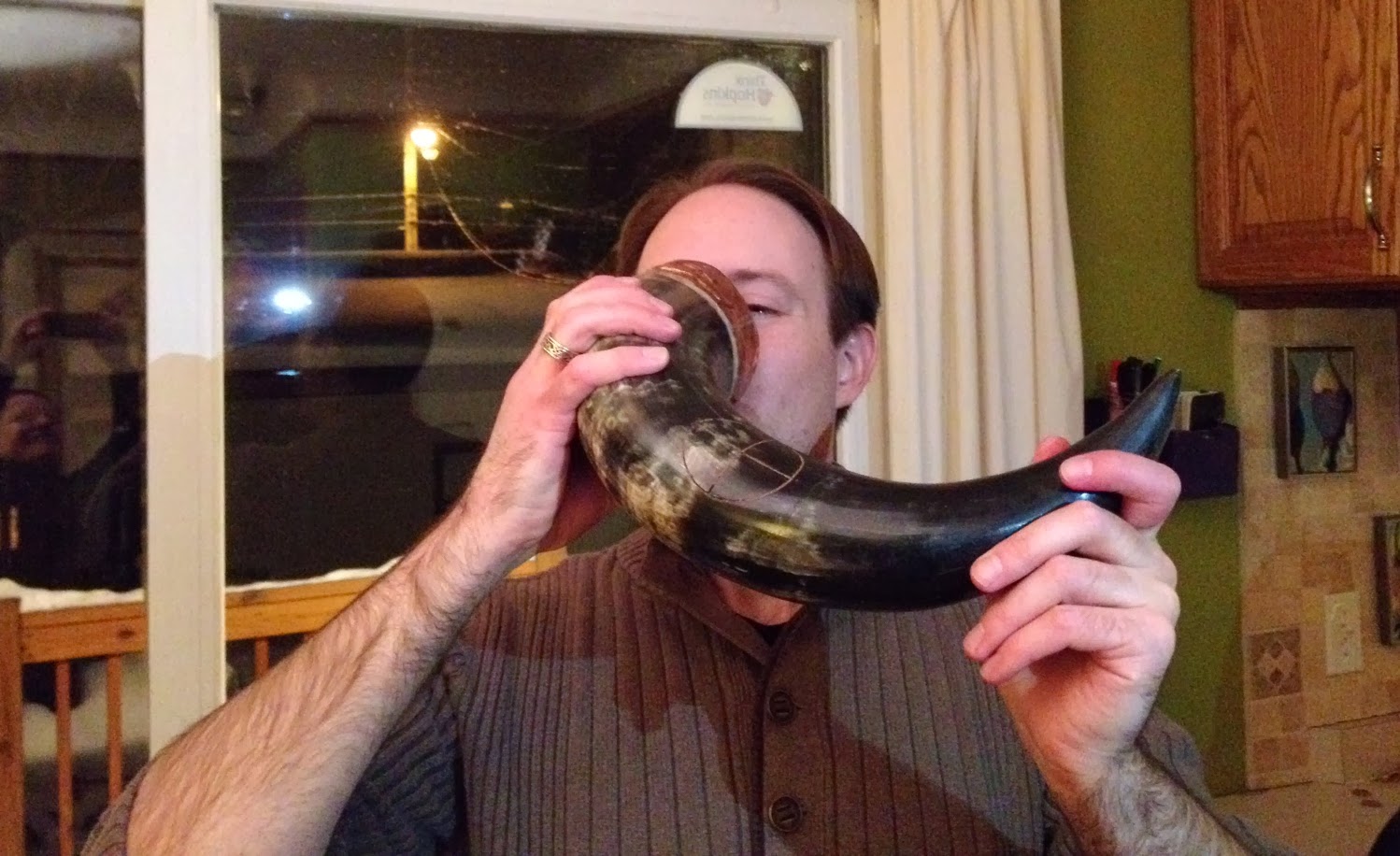 Posted by Drtanglebones at 7:28 AM